Who doesn’t love the thrill of discovery when traveling? Italy is full of incredible destinations, hidden gems, wonderful stories, and opportunities to immerse yourself in history, art, and culture.

Our favorite part of our LocalWonders Travel group trips to Italy is getting to watch our guests experience a most authentic Italy as they visit the each of the exciting cities on our itineraries. Every single stop has something new and unexpected to offer, even if you’re returning for an encore visit.

Studying history, art and culture in books is great, but there’s nothing like diving in to the real thing! Here are some fun facts about Italy – our Bel Paese – that you might not yet know!

Ah, the Eternal City! A day or a week in Rome is like dipping your toe into the fountain of knowledge. Arguably one could spend a lifetime visiting the famous sites and museums and still learn something new each day. One popular destination (photo op!) for guests enjoying our Classic Italy Escapes is the Spanish Steps. But did you know that they’re not actually Spanish? They were built by Italian architects Francesco de Sanctis and Alessandro Specchi and funded by a French diplomat – but at the time Spain had an embassy situated at the base of the stairs.

The ruins of Pompeii have captivated people around the world long after the fateful day Mount Vesuvius erupted in 79 A.D. Seeing the famed “Two Maidens” locked in their dying embrace as the molten rock and ash decimated Pompeii is always a poignant moment for visitors on our Treasures of the Amalfi Coast and Puglia Small Group Italy Tour. Advances in scientific and archaeological techniques sometimes uncover new truths, however!

In the spring of 2017 experts announced that the two maidens were actually young men. Scientists used CAT scans and DNA tests to confirm the victims locked in an embrace were unrelated males probably aged about 20 and 18.

The Grand Pompeii Project opened six newly restored villas in 2015 and this past year the European Commission allocated almost €50 million from the European Regional Development Fund to fund continuing renovation and preservation work. 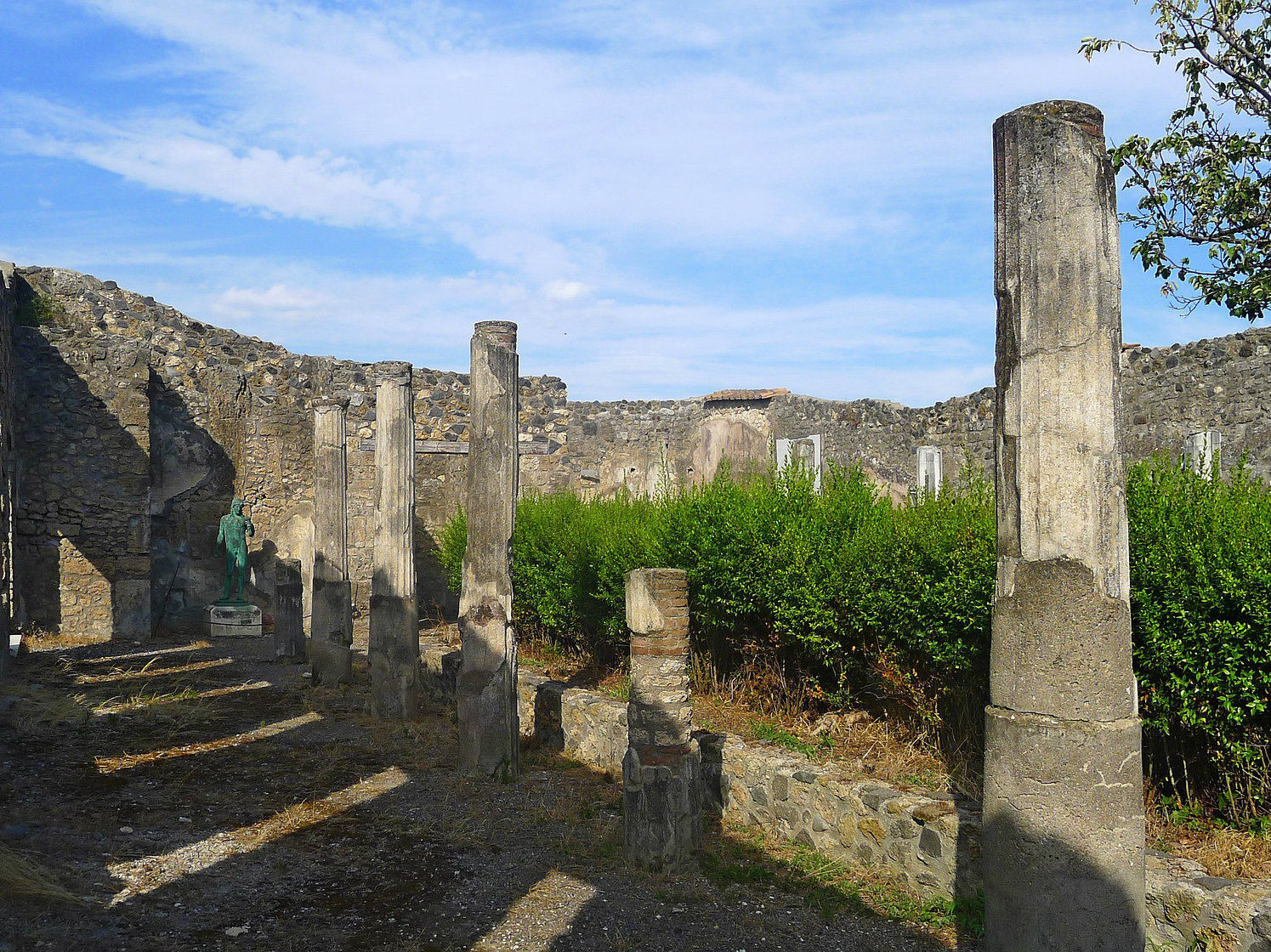 Speaking of all-season travel destinations, Capri gets top marks for anyone looking to enjoy mild weather year round on our Classic Italy Escapes. Did you know that summer temperatures from June to September average about 27 – 31°C and winter temperatures drop to only 10 – 15°C? Small wonder it’s been a popular holiday destination since Ancient Roman times. (You can still see the remains of villas built by Roman emperors like Augustus and Tiberius!)

The famous cave houses and churches carved from stone were declared a UNESCO World Heritage Site in 1992 – the first in southern Italy. Did you know that inhabitants of the unforgettably beautiful Sassi of Matera had no electricity until the 1930s? But they innovated by carving angled windows into the roofs to augment candle and lantern light with slivers of daylight. 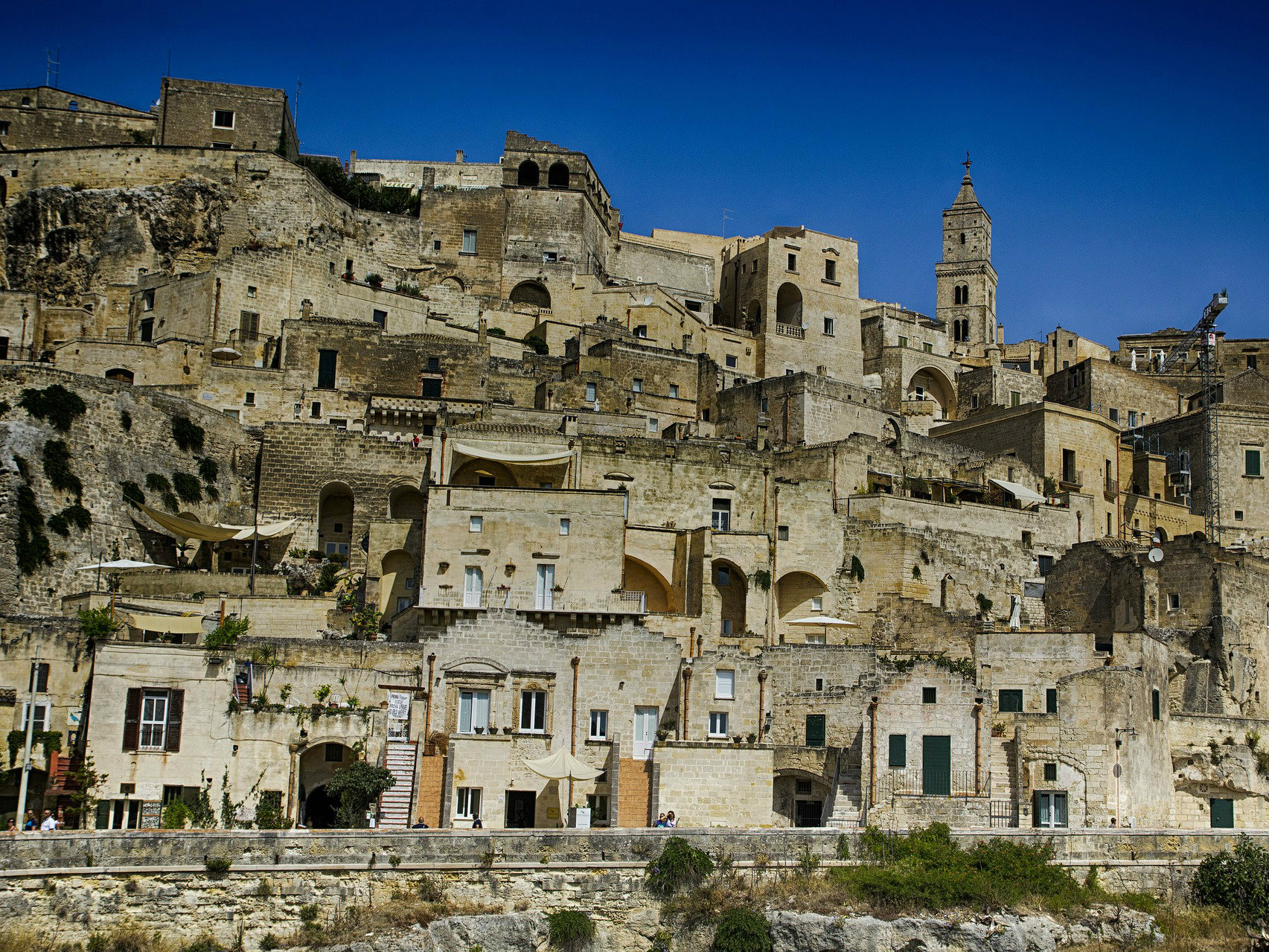 You can come explore this charming small town – another World Heritage Site – with our Treasures of the Amalfi Coast and Puglia Tour. Visitors always marvel at the many trulli, which are small turret-shaped dwellings with white-washed walls and cone-shaped roofs.

You may be surprised to learn that each charming little trullo was actually part of a feudal lord’s tax evasion strategy! Since permanent inhabited settlements were taxed, he had his peasants live in trulli, which were cleverly constructed without the use of cement and were therefore considered temporary. Sneaky!

Down at the heel of Italy’s boot you’ll find Lecce, in the region of Puglia. It’s known as the Baroque masterpiece, with extravagant architecture and swarms of cherubs (putto in Italian) decorating facades and artwork. But know what we find heavenly? This southern city boasts a southern pace of life where the locals rest during midday. The streets are bustling and busy from eight to midnight, taking advantage of the cooler evening air.

On our Treasures of the Amalfi Coast and Puglia Tour, visitors love the chance to visit Bari. It’s the capital city of Puglia and celebrated worldwide for its exquisite architecture, like the 12th Century Castello Svevo and the Romanesque Cathedral of San Sabino. But did you know that locals and travelers also fall in love with Bari for its exceptional local cuisine? You can stroll the Bari Vecchia and watch as local women make pasta by hand, just as in generations past. We recommend you try some fresh pasta in local eateries, but also watch for tiella (baked rice, potatoes and mussels) or mouthwatering burrata (essentially a ball of mozzarella stuffed with soft stracciatella and cream). Delizioso needs no translation!

It goes without saying that enchanting Venice is often requested for our Tailor-Made Italy Group Tours. Small wonder with its 118 islands, countless bridges, nearly 200 canals, and fascinating inner city to explore. But did you know that locals here host a celebration before Lent that predates and rivals that of Mardi Gras in New Orleans? Revellers at Venice Carnival celebrate in fancy dress. The long beak-like Medico della Peste masks date back to the time of the Plague, when physicians thought the perfumes and pungent oils in the beaks could protect the wearers from contracting the black death. 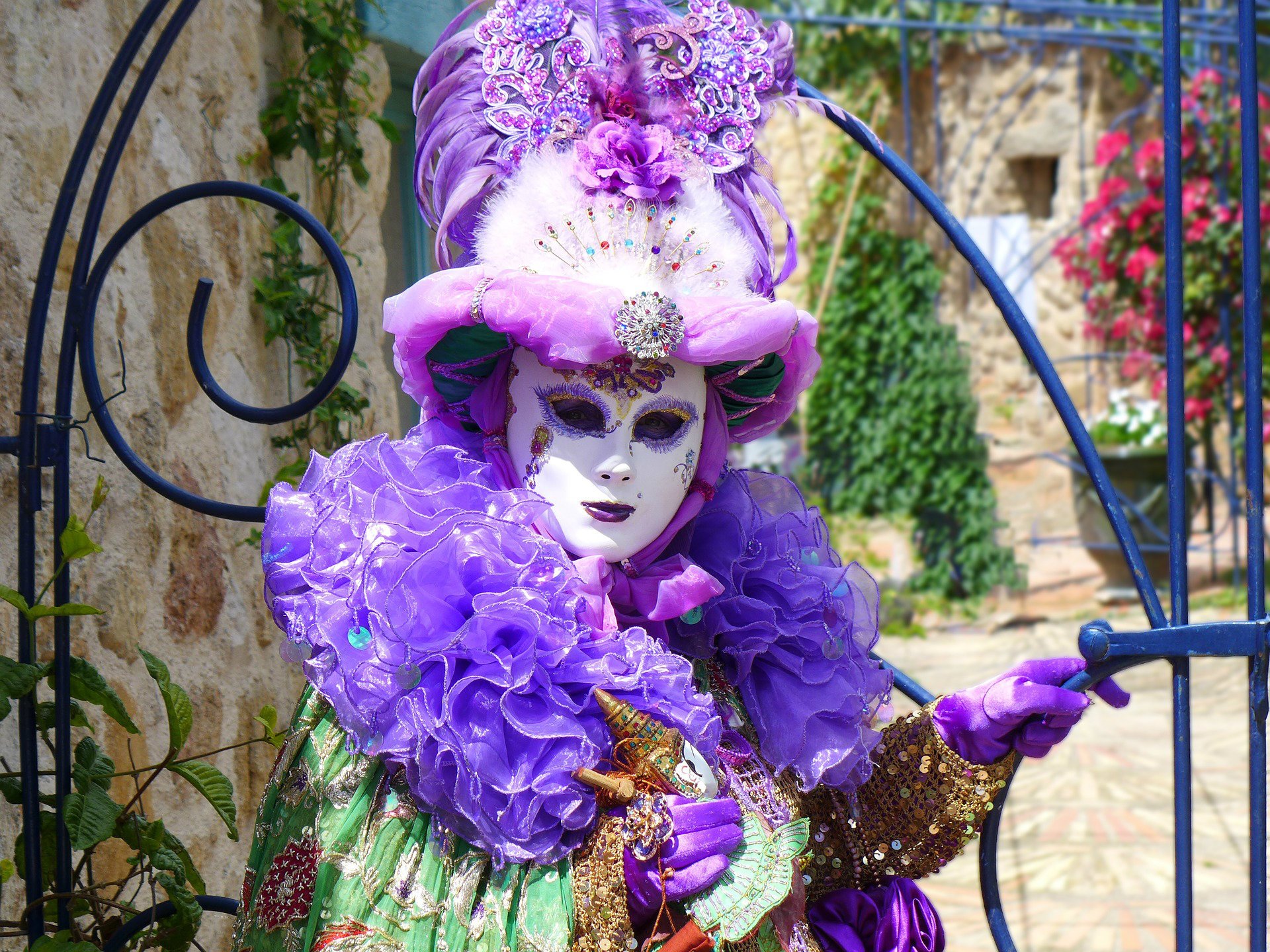 Another stop on the Wonders of Northern Italy Group Tour is the picturesque coastal town of Portovenere. The strip of tall, narrow, colorful homes all crammed along the shoreline are definitely a favorite photo op for visitors. But that’s not all! Way up, perched overlooking the rocky coast, are the ruins of Doria Castle. An important fixture in the politics of the 12th to 16th Century, the ruins provide a simply stunning panoramic view of the area.

Protected as a World Heritage Site with a history that dates back to the 11th century, the five incredible seaside villages of the Cinque Terre are an otherworldly experience for travelers enjoying our Wonders of Northern Italy Tour. (It’s also a national park.) The area is known for rich marine life, hillside vineyards and groves of lemons or olives (cars are banned here!). 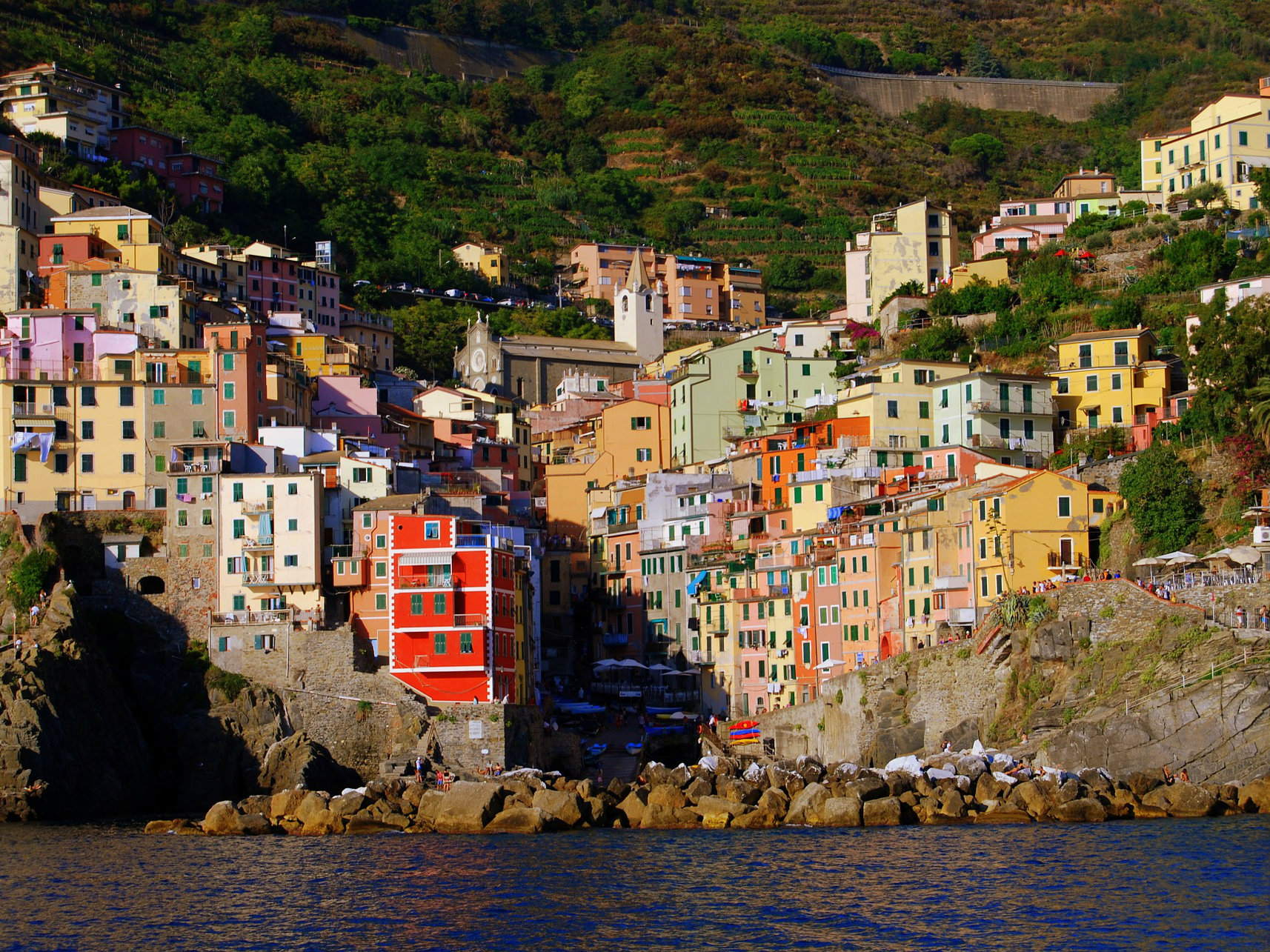 Certainly Cinque Terre is most famous for its breathtakingly beautiful colorful hillside villages, but it has an important winemaking culture too. Imagine, though, how hard vineyard work is on such hilly terrain!

In the 1980s, local winemakers imported a Swiss monorail system in an effort to make the work more bearable. It carried a single person and some crates with tools and grapes up the hillside.

And “today, while most of the work is still done by hand, wine cooperatives have installed some miniature cog-wheel monorails that wind through the vineyards to facilitate the collection process. Because of the backbreaking labor and [maintenance] involved in cultivating and harvesting grapes here, Italians call it heroic winemaking” (www.tourissimo.travel).

This great shot (below) care of L’Italo-Americano shows one of the monorails in use. A beautiful view to be sure, but a part of winemaking not for the faint of heart! 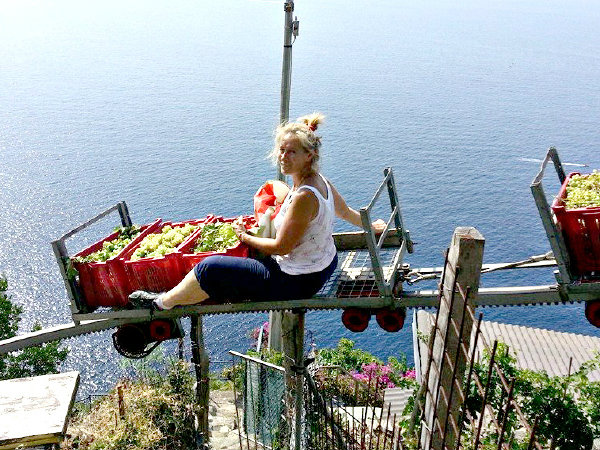 According to the United Nations Educational Scientific and Cultural Organization, Florence is home to a third of the world’s art treasures (including Michelangelo’s famous David)! The best thing is that with our Small Group Trips to Italy, you can determine which highlights mean most to your group. Did you know that Florence is also a trendsetter for fashion? It’s even home to the Salvatore Ferragamo Museum, which boasts more than 10,000 designer shoes on display in a gothic castle. (Can you ever have too many Italian shoes?! We think not!)

This world-renowned wine-growing area in the Tuscany region of Italy is a featured stop on our Wonders of Northern Italy Tour. Do you know what symbol appears on a bottle of Chianti Classico or Chianti Classico Riserva? A black rooster!

This feathery fellow hearkens back to a time about 800 years ago when Florence and Siena were fighting over the Chianti region. The cities decided to settle the boundary dispute by each sending a rider on horseback into the wine territory; wherever they met would be the new boundary. The canny Florentines decided to wake their rider with a black rooster, ensuring he’d crow good and early by not feeding him. Sure enough their rider left much earlier than the one from Siena, whose bird was a well-fed and late-rising white rooster.

This breathtaking shot of Chianti is care of Weddings and Weddings,  a Tuscany-based wedding planning company: 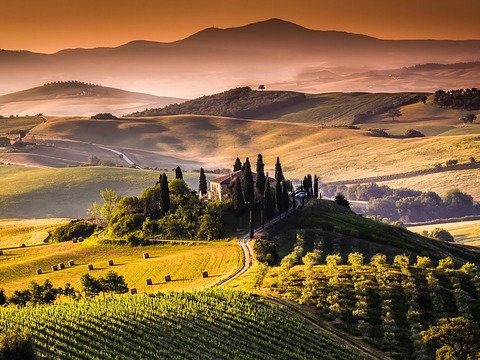 Autumn is beautiful in the countryside and in the cities of Italy!
Contact us today to learn more or to book your own small group Italy tour now!